Space Warps is back! First discoveries from the Hyper Suprime-Cam Survey

Space Warps is back! A new campaign, launched last Friday in collaboration with Science Friday, is aiming to collect 1 million classifications to discover gravitational lenses among 300,000 images of galaxies from the Hyper Suprime-Cam instrument on the Japanese 8.2m Subaru Telescope, Mauna Kea.

Classifications are ongoing, we’re just shy of 900,000, but a few lenses have already been discovered. A very interesting one among these is ‘Subject 21035634‘ (real name and coordinates will be revealed in a scientific paper once the campaign is over), which the Space Warps crowd has ranked with a perfect score of 1 (meaning it’s a highest probability lens candidate)! 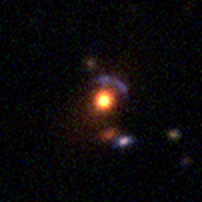 This candidate gravitational lens stands out for its aesthetics, with a nice blue arc seen through an extended envelope of stars from the lens galaxy, as well as its distance: the lens is located between 6 and 7 billion light years away. Finding distant lenses is one of the main goals of this project, and we expect there to be dozens of lenses at an even higher distance than this one.

Can you help us reach our 1 million classifications in 1 week goal and help us find more lenses? Visit spacewarps.org – every classification counts!

It was flagged first on Space Warps Talk by user @Dolorous_Edd.